Donald Trump will go down in history much like most former US presidents before him – some will praise him, others will scold him. But the fact remains that he is responsible for one of the more bizarre political episodes to date, which has deeply divided people into camps of sympathizers and opponents. At the end of this episode, I went searching for and found – in my opinion – the three greatest achievements of the Trump administration.

We humans have a general problem with thinking about things in a way that causes us both negative and positive responses. It’s very hard, for example, to think of nice things about someone we don’t like. Such thoughts rarely come intuitively and spontaneously, which means that we must always make a mental effort when we want to overcome this “cognitive dissonance” and look at things as objectively as possible.

Trump is a textbook example of a person whom it’s almost impossible to judge objectively. Some people adore him, others can’t stand him. Conservatives see him as a hero who cut taxes on corporations and filled the courts with conservative judges. Liberals see him as a fool who mishandled the epidemic of the new coronavirus, dismantled the democratic institutions of the state and with the toxic style of power politics caused a state of collective psychosis not only in the US but around the world.

So I understand when those people say “I hope Trump goes to jail,” even though I don’t necessarily agree with them. One of the fundamental characteristics of populism (right and left) is that it creates an appealing “reality show” for the people, and assigns them the role of a jury and judge (Lock her/him up!) This is only possible in conditions where citizens don’t trust political institutions – a problem that Western democracies have been facing for at least a decade.

I am of the opinion, however, that an appropriate court should rule on whether Trump has done something during his business and / or political career, for which he deserves time behind bars. As far as my life concerned, it wouldn’t really be impacted in any way if Trump retires in peace, moves to a ranch, and lives happily ever after – if he only stops tweeting.

I also disagree that Trump has not done anything good in his term as US president. There is a fuiyo in every haiya. It is only necessary to dispel prejudices and look with an open mind at the right place – the field of public policy. So I looked for three public policy achievements of the Trump administration that I personally think were good – for the US and the wider world. 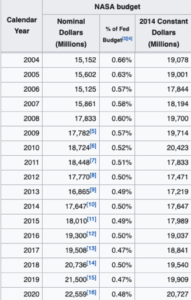 First: Establishing the US Space Force and increasing the budget for the NASA space agency. During Trump’s term, the U.S. military got a new branch for the first time in nearly 75 years. US Space Force was established to protect US interests and infrastructure in space. Also, during the term of the outgoing president, the NASA space agency received a higher budget than in previous terms.

The second column of the table shows the nominal amount of the budget in millions of dollars over the years, and the fourth column the actual budget value, recalculated for all years relative to the dollar value in 2014. However, it is true that the Trump administration had at the disposal the largest budget in U.S. history.

During this term, NASA – in partnership with SpaceX – has managed to carry out some successful space travels, while rapidly developing technology that is expected to take humans to Mars via a base station on the Moon in a few years. Trump’s administration can thus take some credit for helping us to look more intensely into space again and to work seriously for inhabiting another planet besides Earth.

Second: Reducing the trade deficit with China. By triggering the “trade war” with China, Trump exposed the unjust and disproportionate global trade, from which China has benefited the most in recent decades. Their development has largely been based on mass export of cheap products to the North American and European markets, from where they have imported many knowledge, patents and technologies on the basis of which China is now developing into a global superpower.

China has been able to afford such a development model due to the low standards of living and low wages of workers, and the manipulation of the value of the yuan in relation to the US dollar. With the introduction of tariffs in 2019, Trump reduced the annual trade deficit with China by 18% compared to 2018, from $ 420 billion to $ 345 billion. In 2019, $ 451 billion worth of goods and services traveled from China to the United States, while $ 106 billion worth of goods and services traveled in the opposite direction.

American experts have also attributed the protection of US interests in the field of 5G and other technologies, which are the subject of the so called “tech cold war” for global dominance between the US and China, to Trump as one of his important (foreign policy) achievements.

Third: Reform of the criminal justice system in the field of drugs. The U.S. justice system is known to be extremely hars in the area of illegal drugs (let’s leave aside that the most problematic addictions in the U.S. are caused by legal drugs, opiate-based pharmaceuticals). This strict attitude towards illegals substances dates back to the times of alcohol prohibition and the subsequent “war on drugs”, and the instrument has been retained because it is convenient for disciplining “minorities and immigrants”. The drug criminal system has disproportionately affected black and Latino communities in the United States.

The Senate adopted the First Step Act during Trump’s presidency. This law reduced the minimum sentence for drug-related offenses at the federal level and introduced programs for the early release of already convicted prisoners. It also established rehabilitation and career training programs for former prisoners. It is a small step in the right direction of a fairer criminal justice system, and the trend of liberalization in the field of natural psychoactive substances has been confirmed by citizens in some federal states in referendums held on the same day as the presidential election.

The Trump family will impact the lives of many Americans for some time to come, and time will also show whether Democrats have learned anything from the reflection from the mirror set for them by Trump with the support of millions of voters. This would be an achievement of Trump’s, which many left-wing intellectuals – who see Democrats as accomplices in creating the situation which the United States and the American society found themselves in – hoped for. “National reconciliation” will be impossible if the Democrats are just happy that they got rid of Trump and continue with whatever they were doing in power before 2016. As if we still live in the same world.

THANKS: to Alen Rožac who crucialy contributed to the existence of this article.

Reset of the US social and political systems